Towards a New Classification of Arab Media-Government relationship 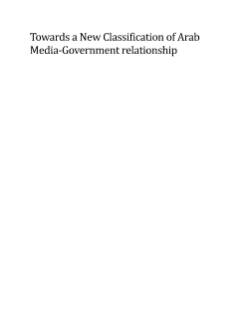 The media system predictor is a simple method for understanding and explaining the media-government relationship in the Arab World. Based on the elements provided in the panes of the model, one may now develop media systems that will explain better the situation in the Arab world, and that may provide a better scale for the evaluation of other relevant media systems, like those of Muslim countries. As shown in table 1, the systems adopted are labeled (1) the socially focused media system, (2) the modernist monarchies media system, (3) the modernist republics media system and (4) the socially liberal media system.  The distinguishing features of each of the systems, which are derived from the interface of the socio-cultural and political elements of society, are explained in the table.

Based on the described distinguishing features of each of the four systems, and knowledge of the social, political and cultural characteristics of the Arab countries[2], we may now place the Arab countries into the four categories (Table 2). This new classification offers a more stable scheme, which places Arab countries based on the interaction of the socio-cultural tenets of society, thus avoiding the inaccurate and-sometimes faulty- interpretation of politics as the key constituent of media-government relationship in the region.

Using a socio-cultural approach, this article provided a new scheme for the classification of Arab and other Muslim media systems, in which media government relations were interpreted based on more than the normative political setting approach adopted by several scholars. The new scheme identified the social and cultural elements of Arab societies that impact the activities and roles of media. Based on the scheme, four systems were developed, and Arab countries were categorized into them, according to the pertinent features suitable for one of the systems; thus providing a scheme that is more stable than William Rugh’s three-and four-tier systems. The scheme is considered a predictor, as it could be used for identifying the media system of socially and culturally similar entities like other Muslim societies.

[1] We use the term “Social media” to refer to the newest communication media in which mobile and internet technologies are applied: face book, twitter, snapchat, Instagram and so on..

[2] Which Rugh has succinctly identified in his writings on Arab media. See for example (Rugh, 1989).