By Yasmine Guerin and Jan-Lukas Bohnhoff 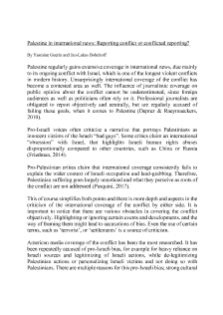 Palestine regularly gains extensive coverage in international news, due mainly to its ongoing conflict with Israel, which is one of the longest violent conflicts in modern history. Unsurprisingly international coverage of the conflict has become a contested area as well. The influence of journalistic coverage on public opinion about the conflict cannot be underestimated, since foreign audiences as well as politicians often rely on it. Professional journalists are obligated to report objectively and neutrally, but are regularly accused of failing these goals, when it comes to Palestine (Deprez & Raeymaeckers, 2010).

Pro-Israeli voices often criticize a narrative that portrays Palestinians as innocent victims of the Israeli “bad guys”. Some critics claim an international “obsession” with Israel, that highlights Israeli human rights abuses disproportionally compared to other countries, such as China or Russia (Friedman, 2014).

Pro-Palestinian critics claim that international coverage consistently fails to explain the wider context of Israeli occupation and land-grabbing. Therefore, Palestinian suffering goes largely unnoticed and what they perceive as roots of the conflict are not addressed (Pasquini, 2017).

This of course simplifies both points and there is more depth and aspects in the criticism of the international coverage of the conflict by either side. It is important to notice that there are various obstacles in covering the conflict objectively. Highlighting or ignoring certain events and developments, and the way of framing them might lead to accusations of bias. Even the use of certain terms, such as ‘terrorist’, or ‘settlements’ is a source of criticism.

American media coverage of the conflict has been the most researched. It has been repeatedly accused of pro-Israeli bias, for example for heavy reliance on Israeli sources and legitimizing of Israeli actions, while de-legitimizing Palestinian actions or personalizing Israeli victims and not doing so with Palestinians. There are multiple reasons for this pro-Israeli bias; strong cultural ties and joint strategic interests have increased US involvement in the conflict for decades and it is, today, staunchly pro-Israeli (Kandil, 2009). Arguably, the role of European countries is less polarized in the conflict today.

But since many have their own very unique historic and geographical relations to Palestine, Palestine and the conflict are a regular feature in European media. France for example has a history as colonial power and is home to Europe’s  largest Jewish as well as Arab communities. Both communities passionately identify with either side and French media coverage of the conflict is highly disputed (Schweitzer, 2011). As former colonial power in Palestine, Great Britain is often accused of being responsible for the ongoing conflict. Facing accusations of bias by either side, even internationally respected British media outlets struggle in dealing with Palestine and Israel. In response to heated debate on the subject, some take steps to avoid provocation. The BBC for example has issued a glossary as guide for its reporters to avoid biased language (Kandil, 2009).

Another European country with a special relationship to the conflict is Germany. Nazi rule over Germany and Europe and the persecution and systematic killing of Jews led many to seek a new homeland in the establishment of Israel. As one conclusion drawn from the Holocaust, solidarity with Israel is shared by many Germans and in some ways institutionalized in media organizations. Oppression and violence against the Palestinians by Israeli forces is nevertheless a well reported concern in German media and frequently criticized (Richter, 2014).

Over time the overall coverage in countries like Great Britain, France or Germany has changed noticeably. While Israel was usually portrayed as victim of Arab aggression in the first decades after the second world war, the discourse shifted with Israel’s occupation of East-Jerusalem, the West Bank and Gaza. Since 1967, Palestinian narratives are increasingly taken into account. British, German and French audiences today can draw from coverage that is considerably more balanced than in the United States but is still flawed.

Violent outbreaks are primarily reported, context is often absent. This fosters various existing misconceptions and stereotypes about either side. Arab countries are significantly affected by the conflict and popular sentiment is deeply pro-Palestinian. Many Arab regimes could once control media outlets and the Palestinian issue was framed according to their interests. The emergence of more independent Arab satellite channels challenged the media presented by Arab officials. When it comes to reporting Palestine, they also clearly differ from Western media (Kandil, 2009).

Al Jazeera is probably the most significant one of these channels. Their extensive narration of Palestinian perspectives was unprecedented in Western and Arab media and quickly gained immense popularity. Al Jazeera was also the first Arab channel that included Israeli spokespersons to narrate their perspective. Al Jazeera’s clear stance has often provoked reaction by states known for their restrictive media policies. In an unusual step, even the Israeli government recently accused Al Jazeera of Incitement and vowed to restrict its coverage of the conflict.

In short, we see that media coverage of the conflict tends to be highly polarized and divisive, and is often affected by political context. It is also often a playing field for the projection of political interests of other international players. This once more highlights the crucial role of international media coverage in the conflict and raises questions of its role.

But is the high level of criticism towards the media justified? Due to the complexity and asymmetry of the conflict, journalistic goals like objectivity and neutrality are hard to define and impossible to achieve. The prolonged character and dimensions of the conflict raise strong emotions worldwide. Although we see honest attempts to report without bias, international coverage seems to further a divisive dichotomy. So how can international coverage play a constructive role? Should journalism aim for unachievable neutrality, or rather take an open stance on the conflict?

These are important questions that professional journalists must ask themselves in covering the conflict, and to which there is no simple answer.

Deprez, A., & Raeymaeckers, K. (2010). Bias in the News? The Representation of Palestinians and Israelis in the Coverage of the First and Second Intifada. International Communication Gazette, 72(1), 91-109.

Friedman, M. (2014, August 26). A Former AP Correspondent Explains How and Why His Colleagues Get Israel So Wrong. Retrieved November 1, 2017, from http://www.tabletmag.com/jewish-news-and-politics/183033/israelinsider-guide

Schweitzer, J. (2011). The Media Coverage of the Israel and Palestine Conflictin the United States and in France. Oklahoma State University