Participants during the Winter School

“Social Media and Teaching – where do we go from here?”

This years Winter School will take place in Berlin from 11.12.-14.12. Around 50 participants from 9 countries will take part and will discuss how to integrate social media into modern academic teaching.

This seminar is a joined course with students from Cairo University in Egypt. Teaming up virtually with these students, you will experience how differently societies utilize social media due to the respective social and political circumstances.

Following the Arab Spring and other protest movements around the world, catchwords such as “Facebook revolution” or “Twitter revolution” have gained popularity. Although these terms seem to overemphasize social media effects, tools such as Facebook, Twitter or YouTube are increasingly used in journalism, political and social campaigns, marketing, fundraising and education, as well. How effective a tool can they be, in fostering change, locally as well as globally?
In order to answer this question, students will make use of social media to push forward their own campaign regarding a both globally and locally relevant issue. The suggested theme to work on is sexual harassment.

Starting from an assessment of already existing online and social media campaigns on various forms of sexual harassment (e.g. #aufschrei in Germany vs. Harassmap in Egypt), the students will then be responsible for planning and carrying out a campaign with a concrete focus on their university and fellow students using both interpersonal and internet tools.

MDLAB aims to advance digital and media literacy education in the Arab region by training a generation of teachers and scholars and developing locally rooted curricula. The 2013 academy was the start of this initiative.
MDLAB offers graduate students and academics a unique opportunity to study media and digital literacy with leading Arab and international experts during two summer weeks. The academy works year-round to further develop curricula and publish them online in an open source environment. Additionally, MDLAB acts as an incubator of innovative ideas and a hub for a network of regional universities and media educators. Topics covered this year include: media literacy and human rights; media literacy’s role in the Arab region; news coverage of human rights violations; the power of images; propaganda in video and film; media and business influences; Arab media ownership patterns; media portrayal of marginalized communities; media and religion, sectarian hate speech and free speech; media, gender, sexuality and body image; the internet and privacy threats; and violence in video games. 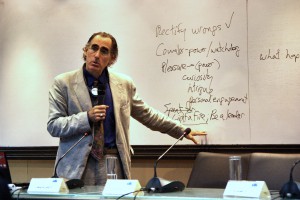 In cooperation with MTI Egyptian University, ARIJ Network, AREACORE has arranged a 12 day training course titled “Towards New Approaches in Teaching Investigative Journalism in Arab Universities”, during the period of 3 rd till 14th September 2015, in Cairo. A number of 7  different Arab universities were present, including Oman, Qatar, Algeria, Palestine, Iraq, Jordan and Egypt. The first 4 days was dedicated for Paris based scholar, teacher and IRE award winning investigative author Mark Lee Hunter.  Why investigative journalism is coming back, its importance to both students and teachers, steps of story based inquiry, challenges of teaching investigative journalism in Arab universities were discussed. participants including academia and PhD students expressed the importance of such training courses in improving media education in the Arab world.