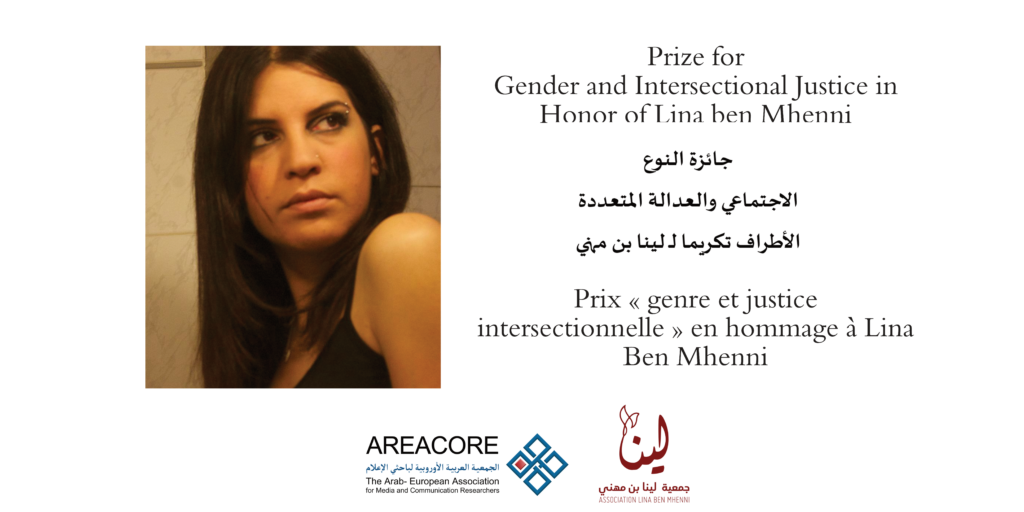 With this event on December 9th 2021, we celebrated the young scholars who received the first edition of the AREACORE Prize for Gender and Intersectional Justice in honor of Lina ben Mhenni, who deceased in 2019. As an activist during the Arab Spring and a woman’s rights advocate, Lina Ben Mhenni’s activism reflected a commitment to intersectional justice, demonstrated for instance through her involvement in reporting human rights abuses during the regime of ben Ali, but also through her role during the uprisings in Tunisia 2010/2011 and her struggle for transitional and inclusive justice since then.

In her welcoming note, Dr. Anna Antonakis gave some background on the AREACORE network and highlighted the importance to strengthen gender and intersectional perspectives in the field of communication studies and beyond. As one of the initiators and committee members of the prize, she stressed that the prize gives hope and encouragement for future researchers in the field. She also looked back on the topics of the call, that was launched on the International day for press freedom (3rd May), which were human rights and freedom of the press, media and democratization, gender and intersectional justice, journalism and peace studies and the study of networked social mobilizations. In memory of Lina ben Mheni’s work, Antonakis addressed first, the importance of independence in research and second, the value of networking, referring to ben Mheni’s book “Get connected” (“Vernetzt euch”, appeared in 2011). Henda Chennaoui welcomed the audience and thanked the committee in the name of the association Lina Ben Mhenni, including Lina’s parents who assisted online from Tunis, pointing out the value of such international meetings to remember Lina ben Mhenni as an activist, writer and academic whose memory and work can be kept alive and continues to inspire a young generation of researchers.

The floor was then given to the three awardees to present their work and were each introduced by a committee member:

Dr. Hamida el Bour held the laudatio for Fatima Zahra Bassim and her study on The Construction of Moroccan Women’s Identity in Moroccan Films.

Dr Abdulrahman al Shami, associate professor at the Mass Communication Department at Qatar University, held the laudatio for the documentary submitted by Soufyane Moussaoui & Jamal Khalil who engaged with gendered media representations. The awardees thanked their supervisor Dr. Kenza Oumlil from Al Akhawayn University, Morocco. Dr. Kenza Oumlil was happy for her students and pointed out that “[she was] very proud of the work they accomplished to trace the genealogy of the women’s rights movement in Morocco and offer a glimpse of hope appearing in the resilience of the activists who tried to improve women’s condition and gender relations.”

The winner of the last category was presented by Dr. Inas Abouyoussef, Dean of Mass Communication Faculty at Ahram Canadian University in Cairo, who introduced the work by Maria Harb.  Her dissertation investigated the extent to which the participation of women in Beirut during the October revolution and response to the Beirut blast has influenced the gender status quo. It relies on in-depth interviews with women who were active during both critical junctures. Among the timeliness of the topic and innovative theoretical approach, Dr. Inas Abouyoussef also stressed the convincing methodology of the study.

In his concluding remarks, M. Yassine Turki, Secretary General of the Association Lina Ben Mhenni highlighted that the award consolidates the link between the activist and academic dimensions in the defense of human and gender rights, which resonates strongly with the position of Lina Ben Mhenni. He also mentioned that the selected works can allow the development of local scientific framework to better understand the context in the MENA region.

The participants agreed that they are looking forward to next year’s prize and invite students and scholars to keep an eye on the next call for participation 2022.

Fatima Zahra Bassim, 23 Years old, is originally from Marrakesh, Morocco. She has a bachelor in arts of Communication Studies and International Studies from Al Akhawayn University Studies and is interested in gender and politics and planning to conduct further research in these fields.

Maria Harb is a Lebanese activist and scholar who recently completed her master’s degree in International Development and Humanitarian Emergencies at the London School of Economics and Political Science. During her undergraduate studies in Psychology at the American University of Beirut, she worked on multiple volunteering and advocacy projects with Syrian refugee mothers and girls, as well as young women with disabilities. She played a considerable role in highlighting the importance of issues including intersectional feminism by participating in photojournalism exhibitions, publishing articles in the university’s newspaper, giving talks, and organizing several events. She was also the co-founder of an online blog which aimed to tackle topics considered to be taboo subjects in Lebanon—including women’s body image and mental health.

On this 3rd May 2021, the international Day for Press Freedom, we as partners of the AREACORE network are happy to launch the Prize for Gender and Intersectional Justice in honor of Lina ben Mhenni.
As an activist during the Arab Spring and a woman’s rights advocate, Lina Ben Mhenni’s activism reflected a commitment to intersectional justice -demonstrated for instance through her involvement in reporting human rights abuses during the regime of ben Ali, but also through her role during the uprisings in Tunisia 2010/2011 and her struggle for transitional and inclusive justice since then. As someone who saw the potential of mobilizing the possibilities of digital media to connect to the Tunisian youth and spread a call for democratization, justice, dignity, and equality, her voice resonated with activists, students and journalists alike. She later came to symbolize a cultural icon of hope transgressing national borders. Her book “get connected”, where she reiterates the uprisings and her engagement in the public sphere documents important shifts in journalism practices.
This call aims to honor Lina Ben Mhenni’s engagement and legacy as a blogger, activist and academic and aims to function as a starting point to generate different readings of Ben Mhenni’s contributions for justice.
The prize shall be awarding projects in the field of media and communication studies and journalism studies direction that mirror her engagement and show directions her all to short life can point us towards in the future.
The committee members:
Inas Abouyoussef (Ahram Canadian University in Cairo, Egypt)
Hamida el Bour (Manouba University, Tunisia)
Nibal Thawabteh (Birzeit University, Paelstine)
Abdulrahman al Shami (Qatar University, Qatar)
Anna Antonakis (Freie Universität Berlin, Germany)